Writing A Novel With Another Person

Writing can be such a personal thing. Even when writing fiction, an author pours so much of him or herself on the page, how can you share that task with another person? How can both voices shine? How do you make one cohesive narrative? Isn’t writing a novel together surely just asking for trouble?

As I sit here typing this out, David is sitting a few feet away working on a page of a story he is writing all by himself. His creativity and love of writing are two qualities that really attracted me to him. It meant a lot to me that we could share this passion and that he might actually be able to encourage me and help me improve in my writing.
I have always loved writing. And until recently I wrote by myself and hardly shared what I wrote with the world. Despite my shyness, I always dreamed of finishing a novel and being a real author. The biggest project I had ever worked on before Second Class Supers I spent over a year working on a first draft of a story. It was a fantasy story for probably pre-teens and took place just after the slaying of the last dragon. I had about sixty or so pages written, the first thirty were extremely well put together and edited. I shared it with someone close to me whom I thought would enjoy it. The person was less than enthusiastic about it and, deflated by their comments, I stopped writing fiction.

I wrote poetry throughout most of my twenties and journaled a lot. Shortly before meeting David, I began writing a new fiction story, and I had no idea what I was doing, I’d write random scenes out of order, and putting them together was a painful jigsaw puzzle. But it really made me remember how much I loved writing stories. Creating characters, and sticking them in a world. My brain wasn’t so good at making new worlds anymore, and I had no idea how to create something others would want to read.

So, one day back in July… It may have been the ninth or a day or two before that, David and I were visiting and he mentioned a new story idea he had had, and I asked if we could try writing it together. He had the idea, and I just kind of rode on the back of that making up characters and throwing them into his world. At times I was worried about stepping on his toes as this story had been his idea, but it didn’t take very long for us both to realize we were both equally creatively invested.

Even though we have both been writing the story together, and we talk often about what we are going to write and how we want the story to go, it is amazing sometimes how we have seen things differently, or how something that was just kind of a throw away element to one of us blossomed into an amazing piece of the world to the other.

Now we have written over 78000 words and if we printed what we have already written the paperback would be over 269 pages long. We have both seen our writing improve by leaps and bounds, I have definitely been more able to see the world we have created and to describe it in my writing and David has become better at characterization and dialogue.
Last night we wrote the outlines for the rest of the pages in the story. We have reached the point where we have discussed and both know how and when this story will end.

It is super exciting to be finishing the first draft of a novel, but it’s also kind of strange. We have been working on this for so long and it has become bigger than either of us first imagined. The editing process comes next and I am scared of that! I know that we have a lot of editing to do! It’s also weird because people have been reading our story, and we hear such little feedback. It’s the first draft, so there’s issues with pacing and the passage of time and it’s clunky in parts, but I hope that there is enough in this story to really draw readers in and make them wonder and worry about the characters and the world. I can’t imagine the editing will be easy, and I wonder how we will be able to cooperate in that new experience.

David found an artist to do cover work for us, 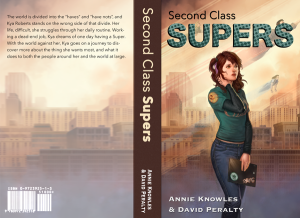 and we plan on self publishing the story when the editing process is done. I hope that others will get even half the maount of enjoyment out of reading the finished product as David and I got out of writing the first draft.

I would love to write a short story on my own, the way that David has been recently, but I just can’t seem to find an idea of something creative and new and original to write about. I can think of several other story lines that could come out of the universe of Second Class Supers, but that universe is best approached by David and I together. I wish I could come up with another world of my own… Just for the fun of writing and so I could actually see the progress in my own writing style.