David packed up the car at Sarah and Nigel’s while I sat with a heating pad on my back after I tweaked it trying to lift our big suitcase. The car was super full and David didn’t really have great visibility out the rear or his blindspots. We had to take the highway though if we wanted to get to Chris and Janette’s with any sort of time to visit. That was a bit scary for me and I really hope we are able to figure out a better way of packing the car before we head to Kingston next Sunday.

We got to Chris and Janette’s on Saturday afternoon and got to visit for a while. We all watched Star Trek Nemesis and Insurrection together. My nephew Reuben asked if we all waned to play Pictionary and that went over like a lead balloon. Janette made us Lasagna and garlic bread for dinner. We crashed in Reuben’s room, which is basically just a king sized bed that goes almost wall to wall! Reuben slept on the couch.

Sunday was a slow start and three cups of Earl Grey kind of day. Reuben left to go see a friend and Chris and Janette went out to see her family, it wasn’t under the best circumstances as they suffered a sudden and tragic loss earlier this week. 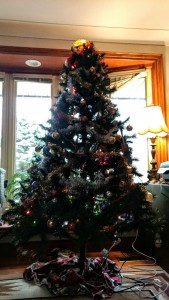 While they were out Hannah set up the Christmas tree and then I strung the lights all with Christmas music playing on the stereo. We asked David if he wanted to help and he decided he’d rather take the time to “watch a violent show you won’t like” instead. Hannah and I had fun with the tree, even though the star on the top gave us much grief! In the end we got it to stay up even if it isn’t straight. I love the eclectic ornaments that they have. Hannah commented that she didn’t understand people who don’t have sentimental ornaments, and I said that you build up a collection of sentimental ornaments over time. Last year, mine and David’s tree only had generic ornaments on it , plus an Iron Man and an R2D2 that we’d got on a whim. We are slowly going to build an eclectic collection of ornaments, but unlike this tree, ours probably won’t have hand made ornaments made out of noodles and crepe paper, with pictures of preschool aged children. But that’s okay, this tree reflects Chris and Janette’s story and mine and David’s tree will reflect our story. Maybe I’ll make it my mission to pick out ornaments for our Christmas tree from the places we visit!

Once the tree was done, I sat and finished up a couple of blog posts while David and Hannah played a videogame. Reuben and his friend came back, and we all played a round of Munchkin. It ended up being a close game and I thought I was going to win when I flipped over the Monster card and it was a curse, and I was wearing the sandals of protection. I had a level 2 monster in my hand and I figured that the others wouldn’t be able to raise the monster’s level enough to stop me. It was going to be my first Munchkin win EVER! But David read the fine print and Reuben won… Because he was the only Cleric. If you haven’t played Munchkin, it’s a fun game and easy to play and way too complicated for me to explain here!

After that we decided to play King of New

York. David and I have King of Tokyo, which was the precursor to King of New York, and a much simpler game by comparison. King of New York adds a lot of features and potential new strategies to the game. We caught on to the new rules fairly quickly, but obviously not quickly enough, as David was the first player eliminated and I was the second. Again, Reuben won the game.

Chris and Janette came home after we had finished dinner. David and Hannah made perogis, chicken strips, and jalapeno cheese sticks. I did not like the cheese sticks. Nobody else found them spicy, but I couldn’t get rid of the burning in the back of my throat. We watched The Aviator, and David and Chris occasionally added commentary about the real Howard Hughes’ life.

Before bed, David and I were both a little on edge because we knew we would have to leave early in the morning for him to work at the office on Monday. We ended up talking for a while and my dam broke. I cried for quite a while, just feeling the grief of losing our daughters. Despite that grief, I am really tankful that David and I have this opportunity to spend time with family leading into the holidays and that we will be able to go, see and do together. There is a lot of good here. I fell asleep wrapped in David’s arms and that is my favourite place in the world.