My first full day in England was a bit of a write off. I slept until 11am and I was confused about the time all day long. I thought dinner was lunch; I didn’t even know what day it was.

Despite that I did spend some good time visiting with my sister, Eva. I also got to learn from her and my nieces about how they have grown and changed since the last time I saw them. I got a good amount of cuddles and I even got to braid both girls hair before bed so that their hair could be crinkley/curly the next day. 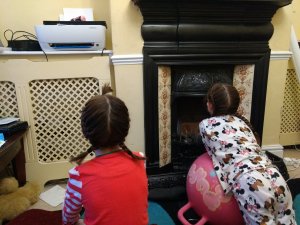 You can see Zy’s unicorn horn.

My older niece, La, is growing her bangs out and growing her hair so that she can donate it. I separated her bangs from the rest of her hair so that I could twist them and clip them to better keep them out of her face. But while I was braiding they were up in a little ponytail on the top of her head. When my younger niece, Zy, saw the ponytail her eyes got big and she asked to please have her bangs turned into a unicorn horn! So, of course, I obliged.

The girls had wanted to go to the park across the street, but time got away from me, and we didn’t make it there. My brother in law, Tom, got home from work and we got to chat for a bit and started watching a show called The Good Place. Eva was working the overnight shift and after a long day at work Tom was off to bed while I was still wide awake. I had a video call with David and then I went to bed just before 2am.

I woke up at 11:30, and got coffee and then got ready to go spend the afternoon in Stratford-Upon-Avon with Eva, Tom, La, and Zy. It was a lovely drive there, and on the way we drove through Loxley and discussed Robin Hood. I saw several houses with thatched roofs including a brand new build getting a fresh one put on. Apparently they are a good and durable option, even in 2018! 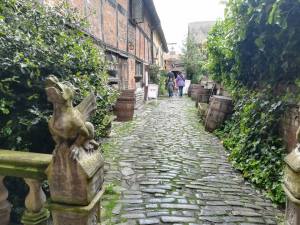 Shakespeare, Henry VIII and Queen Victoria all likely walked on these cobblestones.

The first thing we did in Stratford-Upon-Avon was get some lunch. I had bangers and mash with peas, and a glass of water because I couldn’t figure out what else to drink. After that we went to a little museum all about life in Tudor times. In the museum they had mock ups of a bedroom and a dining room, as well as clothing like what King Henry VIII and Queen Victoria would have worn. There were displays of the inside of ships from that time and pubs and the plague. There was a section about the witch trials and there was a quiz to determine if you’re a witch. 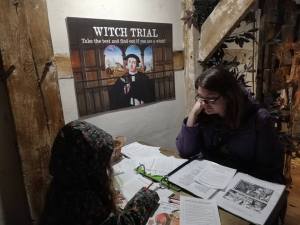 Getting our witchy scores

Eva and I both scored as witches, with her being 15 points more witchy than me, and La scored in the possible witch category. There were also spots where you could choose to smell what the streets of Tudor England smelled like, what a Tudor pub smelled like, and what the Plague smelled like. I shouldn’t have smelled that last one! The girls had a scavenger hunt to complete and they got lollipops when we were done. Eva, Tom and I had cards with the names of different historical people from that time period and we had to find out their fates. Two were beheaded and one actually got to marry the love of her life and get a happy ending. 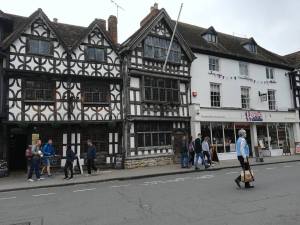 Can you tell the difference between a Tudor and a Mock Tudor?

La is quite the historian and she loves the Tudor times. She even gave me a lesson on how to identify a Tudor building from a mock-Tudor. By Victorian times they had learned how to treat the wood and make flat floors so real Tudors have wonky lines and uneven floors. Both Tudors and mock-Tudors have upper levels that have a wider footprint than the floor below. That was so that they could throw waste out their windows and onto the street. 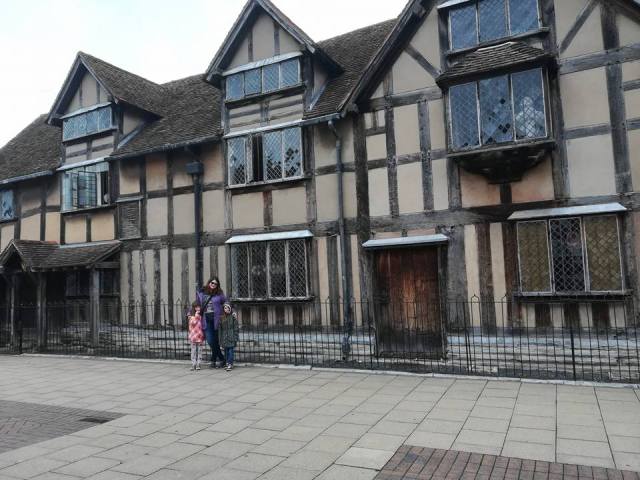 This is the house where Shakespeare was born… Well, at least the part to our right is… 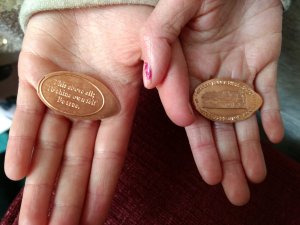 We saw the house where Shakespeare was born. After Shakespeare’s time, half of the house was accidentally torn down. When the mistake was realised, the building was rebuilt in the same style. In the shop next door to the house, both La and Zy got pennies pressed La’s has an imprint of Shakespeare’s house on it and Zy’s has “This above all; to thine own self be true”. They were both happy to get these souvenirs. 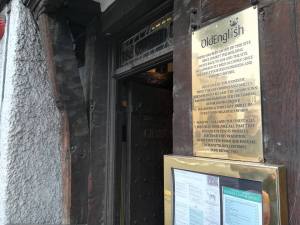 We walked around a bit more, but the girls were getting tired. We stopped in The Garrick, the oldest pub in Stratford-Upon-Avon, for drinks and snacks. There has been a pub in this location since the fifteenth century. We then walked past the site of Shakespeare’s family home which was torn down during his lifetime and is now a park. We also saw the church where he went to school. It was too late in the day to tour the church and hopefully, if we get back to Stratford-Upon-Avon, we’ll be able to get to tour it earlier in the day. 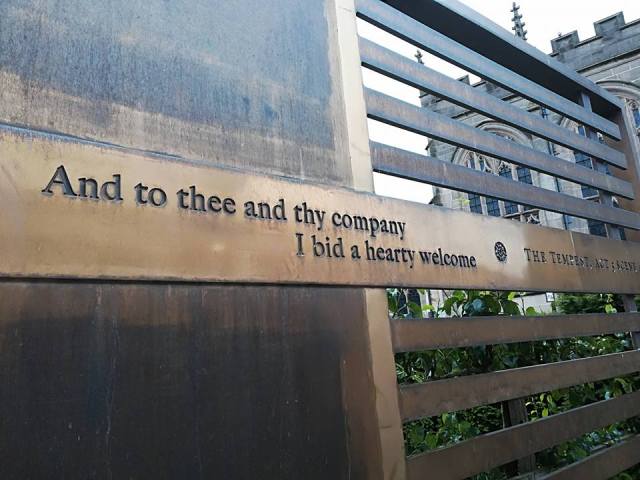 This inscription welcomes you to the park on the spot where Shakespeare’s house used to be.

On the way home Zy fell asleep with her head on my shoulder but every time we hit a bump or turn her head flopped so I wrapped my arm around her and attempted to make her more comfortable. 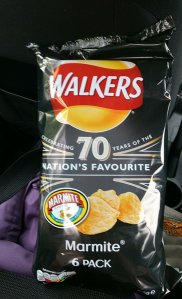 I have been talking about how I want to try real British cuisine and snacks. I have wanted to try Marmite since it’s something that it seems people either love or hate. Eva, Tom and the girls all think that Marmite is gross, but I still wanted to try it. On the way home from Stratford-Upon-Avon, Tom picked up some groceries and got me Marmite potato chips. They’re not bad! I was expecting them to be way worse. They taste salty and kind of beefy. It’s like gravy on potato, nothing wrong with that! I am definitely going to try real Marmite before I go home!