Where is my rainbow?

A baby born after a loss is often times called a

Rainbow Baby, because after the storm comes the rainbow. We had a name picked out for our rainbow baby. We figured it would be a girl since both of our losses were girls; we would name our rainbow daughter Iris Willow. Iris means rainbow. I even have a coming home outfit that I bought two years ago specifically for Iris.

But here’s the thing… Not all storms end with a rainbow. Sometimes when the storm passes, the sky is empty.

We lost Lily on November 7, 2015, and it didn’t take long before we were ready to try again. Once we were given the all clear, it took two cycles with the fertility clinic to conceive Anika. We lost Anika on September 17, 2016. Since then it’s been a struggle… Questioning, researching, blood tests, biopsies, surgery, more procedures, diagnoses, more setbacks… Finally at the start of January 2019 we were ready to try again for our rainbow. We had a plan to do four cycles since that was twice as long as it took for us to conceive both Lily and Anika. After four cycles we would be done. We needed an end point for this journey. We know that because of the pre-cancerous hyperplasia, a hysterectomy would follow whether the fertility treatments proved successful or not.

Right from the start my prayer was that we would either have a safe and healthy pregnancy which resulted in a healthy child we could raise to adulthood or that nothing would happen. I knew I wanted to avoid another loss at all costs… I was tempted to write here that I couldn’t handle another loss, but I know that that isn’t entirely true; you do what you have to do… Whether you think you can or not.

From day one, part of my treatment plan has been cycle monitoring, that means blood tests and ultrasounds every 2-3 days. This is important because we can make sure that I have a dominant follicle and that I don’t have too many, since pregnancies with multiples (especially with a transabdominal cerclage) carry more risks. But weeks upon weeks of cycle monitoring was hard on my body, especially since my left ovary is sitting behind my uterus making it hard to get clear images of it without a lot of pressure. I sometimes felt cramping and discomfort throughout the rest of the day.

Starting in February, I did my first round at the highest dose of letrozole. This was the dose that was successful at giving us Anika. This time around, nothing happened. I ended up having to induce a period after three weeks of waiting for follicular development with nothing happening. I decided that that didn’t count as a cycle since I didn’t ovulate. After inducing a period, I started another round of letrozole at the highest dose and again after three weeks nothing at all happened. We met with Doctor M2 and she said the next choice was to do injections. Malcolm mentioned that we were kind of hoping for a clear path forward: a clear “this will work” or “it’s best if you stop now” kind of deal. Dr. M2 said that there are so many options and that most people can get pregnant with enough persistence and the right intervention and that while she wouldn’t push us to go further than we were willing, she would never tell us to stop.

When we were trying for Lily and for Anika, we had decided that due to the price and the invasiveness, we weren’t willing to do injections. This time we decided to give injections a try. We knew that we had a trip to Florida coming up and that the cycle monitoring part of the clinic closes in the summer, so we wanted to give this the best chance possible in the time we had.

The gonal-F, which is the injectable medication

I used, costs just over $1/unit. And I was taking between 50 and 100 units a day while I was on it. Every day between 4-6pm Malcolm would inject the needle into my stomach. After upping the dose three times with no changes, we had reached the maximum we were willing to spend, and we had hit the end of the time available to us for cycle monitoring. I got a call from the fertility nurse that day to let me know that there was still no change and that Dr M2 was offering us the choice to cancel the cycle or to up the dose again. I felt a sense of calm as I explained that we were done and that we would be cancelling the cycle.

I got a call from Dr M2 the next day to check in on me and how I was doing after deciding to scrap this cycle and stop treatment. I explained to her that we had reached the limit of what we were comfortable doing especially given that we would be heading to Florida the next week. Dr M2 was understanding and supportive and wished us well on our trip and suggested we touch base after we got back because the whole pre-cancer issue is still a potential risk.

In the first few days after stopping treatment I felt immense relief and calm. I was so happy to not have to do the ultrasounds and blood tests for cycle monitoring and to be done with the injections! I felt less like a human pin cushion, and more like a human! I had so much to look forward to and Malcolm and Luna were such amazing comforts.

We were on our way to drop Luna off at my sister Becky and brother in law Denis’s house, (they would be taking care of her while we were in Florida) and I was discussing with Malcolm the different kinds of support I get from the women in my online support groups, in one group they were all telling me that I have made such an impact on so many women and that they hope that I find and maintain a sense of peace throughout this transition, in the other one they were telling me not to give up and to discuss my situation with another doctor, and to go on this fertility diet or that one, and that there are so many options without giving up. That’s when the water works started for the first time since making the decision to stop. They didn’t see stopping as a viable option, they didn’t see how anyone could be happy when they were a loss-mama without a rainbow baby. It made me feel broken and upset that I might have to explain again and again that I chose to stop. I chose to see the good in my life and find happiness without living children.

The trip to Florida was perfectly timed. It gave 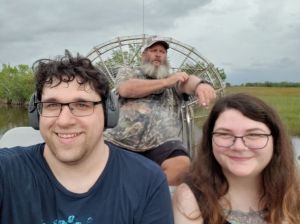 Malcolm and I a chance to reconnect, to remember the magic of life and shared experiences. We went to Florida on our honeymoon, this time we shared the experience with my nephew Jordan and my niece Tash. Malcolm and I took an air-boat ride through the Everglades with one of his friends and his family, and I even got to hold an alligator! With Jordan and Tash, we went to the Wizarding World of

Harry Potter, we went to Disney City Walk. I loved watching Tash and Jordan enjoy and experience Diagon Alley and Hogsmeade and Tash and I used our wands to do spells around the park. We had several other adventures as well including a unique view of the city from the observation wheel at Icon Park and driving through flash flood warnings. The daily thunderstorms were fun, and we had a couple of ducks that we named Chad and Shirley who

had made their nest right next to our covered porch. It was so good to experience that trip knowing that what I have is so good. I have such an amazing family, both the ones who were on the trip with me and the ones back home. I have an amazing husband. There is joy here. There is joy in my life and in my heart. Lily and Anika are with me always and that’s not a bad thing. I can talk about them without crying, I can remember them and love them and be okay. I can make memories with the people I love and move forward. 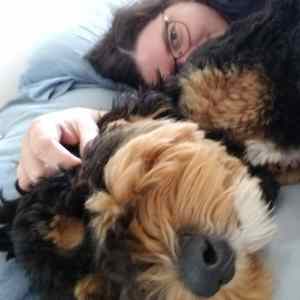 I know that waves of grief will come. I know that I will weep for what I have lost and what will never be. But on the whole, I feel whole.

2 thoughts on “Where is my rainbow?”